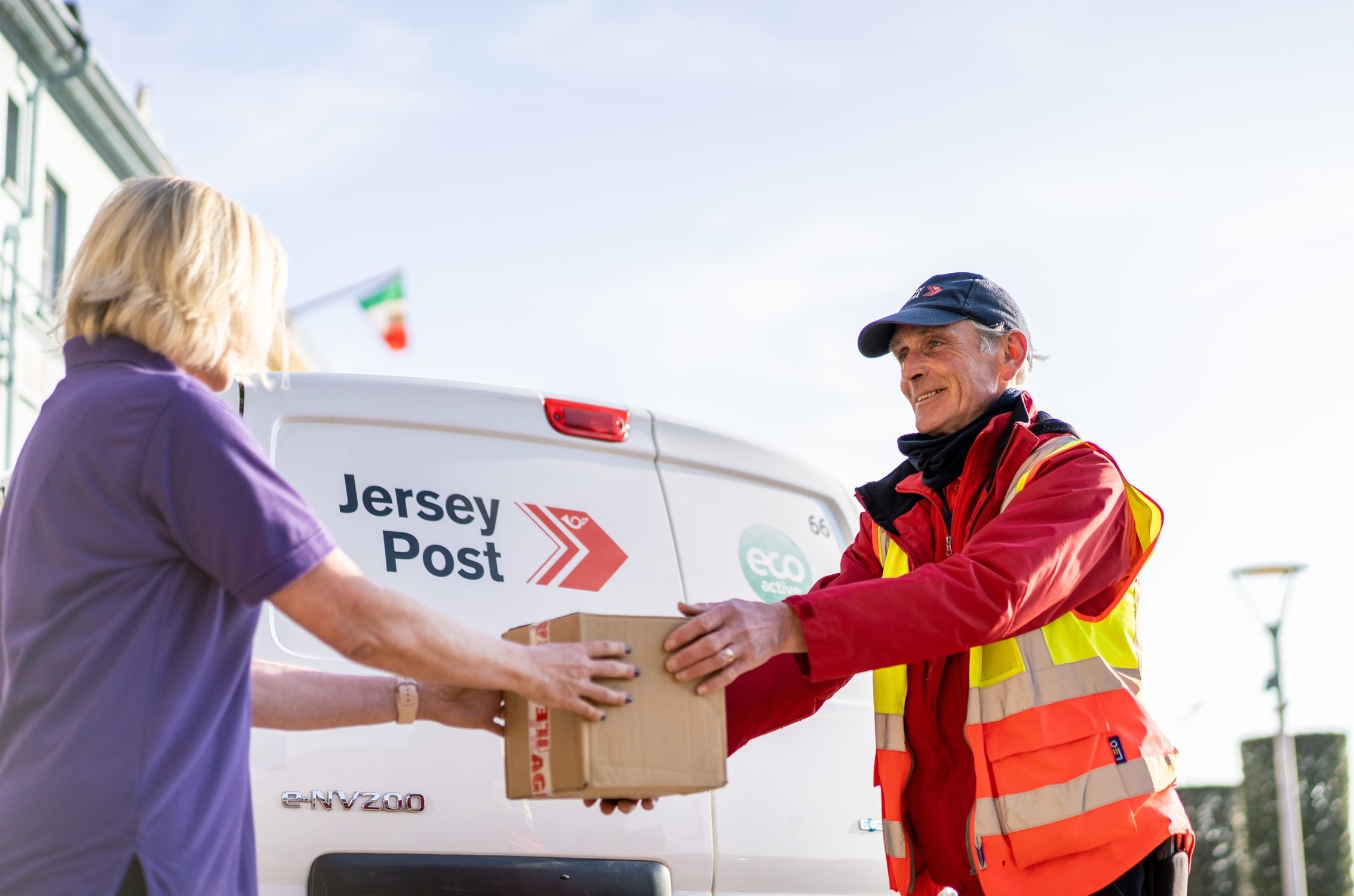 THE phrase ‘it’s lost in the post’ is one rarely heard these days in the context of Jersey Post.

Indeed, in this year’s customer satisfaction survey, 94% of Islanders rated their postal worker as good or very good, while 87% awarded the same praise to the organisation’s overall delivery service.

But, when one Islander’s documents did ‘go astray’ recently, the customer was surprised when her query prompted a telephone call from the company’s chief executive.

‘As an organisation, we receive very few complaints. In fact, the low number of complaints almost surprises me,’ said Mark Siviter, who took up the role of chief executive three months ago.

‘When I saw an email the other week from a woman querying where her documents were, I picked up the phone immediately to apologise and assure her that we were on the case. After our conversation, she sent me a message saying that she couldn’t believe the chief executive of Jersey Post had contacted her.’

For Mark, though, making such a call was a natural response to the situation.

‘Why wouldn’t I call her?’ he said. ‘It’s important that, if something goes wrong, you pick up the phone and talk to the customer about it.

‘For me, those moments when things go wrong are the real moments of truth. There is no excuse for shying away from a problem.’

As well as exemplifying Mark’s hands-on approach, his response reflects his love for a service which lies at the heart of the community.

Having spent ‘all his life in logistics’, Mark’s professional career started as a shipping clerk for an ocean freight company and included stints at some of the world’s largest international forwarders before he joined the UK Post Office in 2015.

‘In my first role, I was banging away at a telex machine, sending out alerts to ships,’ he reflected. ‘I then joined DHL, firstly as chief executive of DHL Global Mail UK and then as managing director of DHL Global Mail Europe. Having spent many years dealing with ships and then aircraft networks, I have moved from working with big stuff down to small packages, in the form of either letters or parcels, but the same principles apply.’

It was during his time at the UK Post Office – an organisation with some similarities to Jersey Post – that Mark gained particular experience in the parcel business.

‘While the scale of the two organisations is slightly different – the UK Post Office had more than 11,000 branches – many of the structural and operational challenges are similar. Before leaving the UK, I negotiated an 11-year deal with Royal Mail, which enabled the Post Office network to sell or accept other carriers’ products, something they had never been able to do previously.

‘It was a move which had to be made as the market has changed considerably and the Post Office needed to be liberated to remain successful. The first business I brought into the network once that deal had been agreed was Amazon which, unsurprisingly, is one of Jersey Post’s biggest customers.’

His description of Amazon and Royal Mail as ‘fundamental’ to the success of Jersey Post’s service provision underlines just how extensively the organisation’s business model has changed, as traditional letter mail has declined and parcel deliveries – supported by a boom in online shopping – have become a ‘lifeline’ for the operator.

But, while the sight of Jersey Post’s electric vans on Island roads may be familiar, local postal services account for only a fraction of the group’s services.

‘One of the things that attracted me to Jersey Post was the diversity and international nature of the business,’ said Mark. ‘What a lot of people may not realise is that the Jersey Post Global brand now operates across four continents and in a range of sectors from international logistics to digital communications. In fact, 40% of the group’s revenue comes from its overseas operations.’

While Mark credits the organisation’s former chief executive Tim Brown and the leadership team for their ‘vision’ in diversifying the business, he stresses that each acquisition was linked to the group’s core purpose – supporting the local community.

‘What I love – and what I came to appreciate at the UK Post Office – is that balance between social purpose and commercial sustainability,’ he explained.

‘Post offices are an inherent part of our society and, while we have to make the right commercial decisions to ensure our long-term sustainability, those decisions have to underpin our connection with the community.’

Achieving such a balance would be complex at any time but, faced with the rising cost of living, high levels of inflation and forthcoming changes, such as the reduction of the GST de minimis level on all imported goods, this act is more challenging than ever.

‘Having grown up in the Midlands at a time of hyper inflation, discontent and industrial action, I had hoped not to see that situation again,’ Mark said. ‘However, there is no doubt that we are facing a very difficult economic environment and that will create challenges both for our customers and our organisation.

‘From an Islander’s perspective, I think the cost-of-living crisis could reduce consumer demand as people are forced to prioritise where they spend their money. As you go up the supply chain, this could lead to some ecommerce companies reducing their inventories, which, in turn, could lead to less choice for Islanders.

‘Next year’s move to reduce the GST de minimis level from £135 to £60 will also make it more complex for companies to ship to Jersey and could limit the market to a handful of suppliers who can afford to install the right systems.’

Looking at the broader economic picture, Mark said that businesses were also facing higher procurement and distribution costs, which were likely to impact on both individuals and on the firm’s global logistics operations.

‘While our local fleet is electric, which helps us to keep some prices under control, we are not isolated from economic pressures and, in some sectors, there are dominant players who will pass inflationary pressures onto businesses,’ he said.

Despite the undeniable challenges, though, Mark is upbeat about the opportunities ahead and sees potential not only for Jersey Post to grow but for it to support the development of other Island businesses.

‘I am very encouraged by the approach of the new government and the swift and decisive announcement of the mini-budget,’ he said.

‘I really get a feeling that, with a more diverse government focused on supporting citizens, all the stars are aligning to create a better strategy for the Island. As a government-owned organisation, we have to play our role in supporting that and one of the biggest areas where we can do this is through our freight services.

‘Our recent acquisition of Woodside Logistics has enabled us to grow that side of the business significantly and to focus on giving people a high-quality service at fair prices. That is an area which we can develop further, particularly when it comes to local businesses exporting goods. There is a great opportunity for any business in this area to access relatively low shipping costs from Jersey to the UK and take advantage of our ability to ship to every country around the world.’

Another area which Mark is keen to grow is the company’s digital services.

‘In the dialogue I have with government, I stress the group’s expertise in logistics and digital businesses and ask how we can support in these areas,’ he said. ‘One example of this is Jersey Me, an identity service to help Islanders to access the government’s online services. As governments digitise services, it is vital that we do not leave anybody behind and Jersey Me enables people to come into the Post Office in Broad Street and gain the support they need to access these facilities.’

And, while Mark stresses the need for consolidation and consistent delivery of existing services, he is also keen to continue diversifying the business ‘to further support local businesses and consumers’.

‘In the next six months, the focus has to be on putting our foot on the ball and making sure that we know where we are passing the ball next,’ he said. ‘While you can afford to take a bit more risk when times are good and the economy is flourishing, it is now time to be careful and we need to invest our time and money in areas where we can mitigate that risk.

‘Having said that, there are definitely opportunities for us to work with other States-owned enterprises, such as Ports of Jersey and Jersey Telecom, and, if we make the right decisions in the short term, I think that, longer term, there will be opportunities to develop and grow, particularly in Europe.

‘When you go through a recession, there are always good businesses which struggle for cash, and that creates chances to expand.

‘I also believe that there are opportunities in adjacent markets in Jersey, particularly where deliveries are concerned, and I see potential to support businesses further through our online marketplace, Fetch.je.

‘Critically, wherever we invest and however we diversify, those moves will not be follies driven by shareholders who want to increase their dividend. Instead, they will form part of a well-thought-out strategy to ensure that those investments enable us to continue supporting the local economy and providing our core services to the community.’